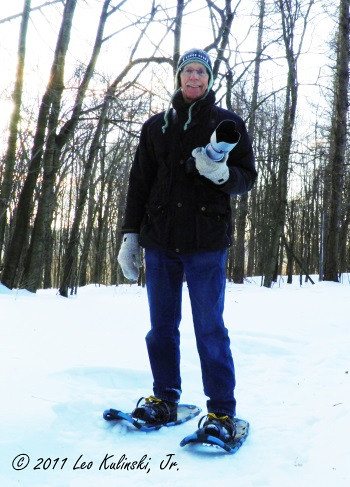 One frigid Saturday morning, White Memorial’s “official” photographer Leo Kulinski, Jr, met me for breakfast and conversation. “I hope you’ll be able to get enough material for your story, Gerri.” Leo is a Torrington, CT native and a graduate of Xavier University in Cincinnati, Ohio with a Bachelor of Science degree in Industrial Relations. (Those of you who know Leo are saying, “HUH?”) Leo is quiet, modest, and unassuming. He is a brilliant photographer, an amateur astronomer and meteorologist, and a dedicated runner (he has participated in every edition of the Litchfield Hills Road Race and qualified for and completed the Boston Marathon in 1997 and 1999). His two books, "Veronica the Red-tailed Hawk" and "The White-tailed Deer of White Memorial" grace the shelves of our gift shop. Many of his breathtaking pictures can be found on our website. His work has been used by filmmakers, publishers, and television producers. Leo stays humble. He never toots his own horn. He wasn’t always inspired by nature or running. Kulinski discovered White Memorial in the late 1970’s while preparing for the first Litchfield Hills Road Race. A few of his friends decided on a lark to run the seven mile test. They began training in April for the June event. (You runners out there are saying, “HUH?”) After the race was finished and the debilitating pain subsided, (“We were lucky we didn’t kill ourselves! I couldn’t walk downstairs for a week.”) Leo was hooked on running. On his regular jogs through White Memorial (40-50 miles a week), Kulinski met Jeff Greenwood, White Memorial's Education Director. He also began hiking the White Mountains with friends (he has climbed all 48 of the 4,000 footers in the White Mountains). He tried his hand at photographing birds and mountains. Interest in taking concert portraits when Eric Clapton came to town triggered Leo into buying his first 35mm camera and telephoto lens. A photography and development course stoked Kulinski’s interest in his new found hobby. When he saw a Carl Sams photograph of a deer and wildflowers on the cover of a 1987 Audubon Magazine (which Leo brought to our meeting!), the wildfire started! Sams’ book “Stranger in the Woods” coauthored with his wife, Jean Stoick , is a photographic fantasy of the relationship between a small family of deer and a snowman. It tugs at Leo to this day. Eventually Kulinski approached Greenwood about having a photography show at the Conservation Center, “White Mountains, Whales , and White-tailed Deer”. (Did I mention that Kulinski has been on over 100 whale watches and has assisted experts in the photographic cataloguing of fluke patterns of Humpback Whales?) Kulinski and Greenwood became close friends. Together they spent a day hiking the five 1,000 foot peaks of White Memorial. “It would have been quicker”, said Kulinski, “but Jeff had to describe everything he saw. We got ten feet along the trail and he (Greenwood) started in. I knew it would be a long day.” Funny, talented, disciplined, generous, kind, passionate, and curious: Leo Kulinski, Jr. is a man of few words but a man about whom volumes could be written.